Cinema and emotions. A journey to childhood

This is a journey to childhood for both for adults and children, and an invitation to discover how childhood has been projected in the cinema over its more than one hundred years of history. This is the idea behind the exhibition organised in the City of Culture by La Cinémathèque Française and the "la Caixa" Foundation, in partnership with the Regional Government of Galicia as part of the holy year of St James, Xacobeo 2021. Through it, visitors can once more live the emotions we experienced in the early years of our lives.

The exhibition is composed of fragments of films from a variety of genres, periods and countries. In addition, there are drawings,  storyboards, photographs of shoots, posters, mock-ups, as well as iconic objects such as a hat and two pipes of the actor and director Jacques Tati, a statue of King Kong measuring over two metres, and a Nimbus 2000 broomstick from the film Harry Potter and the Philosopher’s Stone. The pieces come from the funds of La Cinémathèque Française, which are among the richest in the world in the field of the cinema, as well as the personal collections of film makers and collectors. 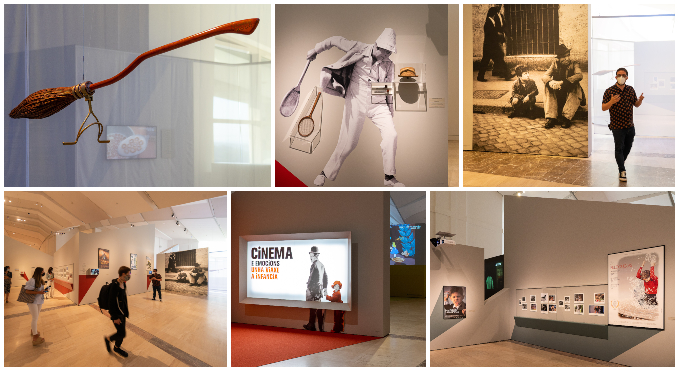 It is divided into seven sections: Joy, Anger, Laughter, Tears, Fear, Courage and Illusion. It encourages us to relive the different emotions that have accompanied us all our lives and that we encountered for the first time in childhood with particular force, by displaying how they are represented in films.

The exhibition also reveals the mysteries of how films are created and how they generate fascination through this illusionary world. The journey is therefore twofold: back to the days of our own childhood and to the secrets of film production. The trip will lead us to the discovery that although the tools with which the cinema works are amazing, the emotions it can arouse are no less genuine.