Rem Koolhaas studied architecture in London after having worked as a journalist at the Amsterdam Haagse Post and as a set designer for films. Further to that he worked for a few years in New York, the time when he wrote an essay on the impact of metropolitan culture on architecture.

In 1975, together with Elia and Zoe Zenghelis and Madelon Vriesendorp, he set up the Office for Metropolitan Architecture (OMA), a studio from where he tried to define the new types of relationships between architecture and the contemporary cultural situation. He also fostered at the same time the Grosztadt Foundation to co-ordinate the cultural activities of OMA.

Koolhaas won the Pritzker award for Architecture, and some of his best known projects are the extension to the Parliament building in the Hague, the new city of Melum-Senart, the Library of France or the Centre for the Arts and Communication Techniques in Karlsruhe.

A contiguous formality is strengthened between the institutions and nature, surrounding the hilltop, whereby the area left on the hill equals that which is taken up by the institutions. So instead of placing the programme’s 60,000 metres squared on top of a landscape ten times the size, a balance is achieved.

Both the roofs as well as the hilltop are reserved for parking spaces. Given that the hilltop and the built ring lie together, with short visual distances, the sublimeness in the hilltop enhances its rustic qualities and maintains the monochrome rocks in the set of roadways, parking spaces and nature. The complexity of the sublime is achieved inside the inner circle, through a double crystallisation: the circle becomes a polygon and the glass façade becomes an even more polygonal filigree, following the ideas of Eugene Emmanuel Viollet-le Duc whereby through the process of crystallisation, both the mountains and buildings, or even the Earth’s globe itself, are a part of the same architecture.

The roads leading to the hilltop partially cut across the building, in doing so they enrich the programmes of the institutions. 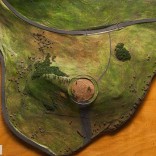 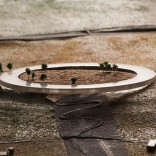