At an exhibition prepared by the Museum of Contemporary Art (MARCO) in Vigo, this best known Galician architect has defined his work as "ever more naked, ever more simple, ever more transcendental, ever more personal and at the same time less personalistic".

A critical follower of rationalism and the postulations of the Modern Movement, Portela has authored projects such as the celebrated Special Plan for the Historic Centre of Allariz, the Bus Station in Córdoba, the Domus in Coruña or the Natural Park of Cádiz Bay.

This project for a cultural agora for Galicia is structured from a sequence where two core spaces located at the ends are linked by a linear pathway. And the same as in any classical agora, the temple, the stoa, the theatre or the buleiterion weave a strongly ritualised space which at the same time is full of episodes to duly meet the manifold situations demanded by the complexity of the city. Belvederes and balconies are opened at critical points to reinforce the uniqueness of the site, its unrepeatable condition, and in consequence, its sacred value.

O the top of the hill the plaza of the Stars in situated. A square-shaped precinct carved into the very serpentine stone of the site. As if it were a churchyard on the hilltop, without the church but loaded with memory. A balcony on the top of mount Gaiás where there is a visual and topographical vantage point only to be surpassed by the Cathedral’s spires.

The City of Culture of Galicia would be built out of the most genuine local materials, making the most of their possibilities and seeking new perspectives in their treatment. Simultaneously they ought to be a showcase before the rest of the world. The furniture and decoration would be commissioned to Galicia’s most avant-garde industrial designers.

Actions in the field of flora and vegetation intend to unify the essence of the project, its location at Santiago de Compostela and the natural and geographic surroundings. It entails blending the cultural function of the project, a project for the future, with the traditional culture of the environment where it is located. Thus, the future sinks its roots into the past and does not detach itself from it, but rather complements it, explains it and creates a superior order that is richer and more complex. 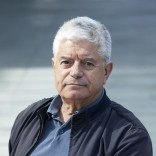 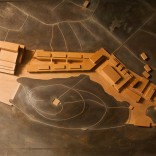 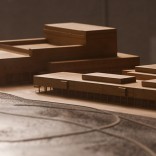 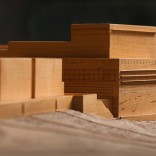 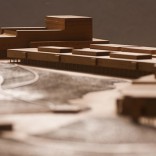