After graduating from Architecture schools in Barcelona and Geneva, Ricardo Bofill created in 1963 his Taller de Arquitectura (Architecture Workshop), a studio composed of architects, engineers, sociologists and philosophers.

Bofill is one of the major representatives of the post-modern style in contemporary architecture. His projects tend to develop starting from the idea of a vertical city. His initiatives bestow great importance to the use of new technologies and are the result of multidisciplinary work.

He is author of many theoretical works, and has been awarded renowned prizes. Bofill’s career is marked by his urban planning for cities such as Prague, Madrid, Seville or Montpellier (Antigone) and emblematic buildings such as Madrid’s Conference Centre, Barcelona Airport, the National Theatre of Catalonia and the Donnelley Building in Chicago.

The project for the City of Culture of Galicia, the new obradoiro for Galicia, is defined as a plaza – balcony over Santiago de Compostela, organised in different buildings along the streets.

Galicia, Sonimatheque, Newspaper Archive, Museum of Communications, Auditorium and Opera Houses are detached buildings, formalised through a great environmental container that is Mount Gaiás itself. The harmonious structure of the project is based on a spiral construed out of the golden number, two perpendicular axes and a square grid with a logarithmic growth pattern. The main uses, projected as de-structured typologies, conform new types of spaces, that are made possible by the fact that each one is independent and is supported on the terrain.

The relationship to the city is physical and visual. The City of Culture of Galicia is a mirror deformed and reinterpreted from the immanence that has configured Santiago de Compostela. The plazas, streets, emblematic buildings and the vernacular Romanesque and Baroque architecture become the archaeology on which a new modernism is projected. The concept of the project allows for great freedom and organicity.

A new sign, an emblematic symbol conceived from reading the historic city, the relationship with it, the visual opening to Galicia, where art, culture and science relate to one another through information and communication technologies. A multidisciplinary, interactive place, in the fashion of medieval monasteries, where knowledge was preserved and disseminated. 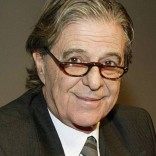 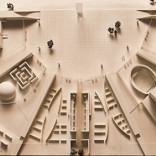 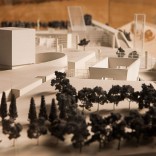 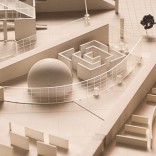 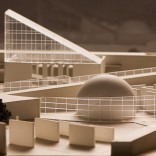 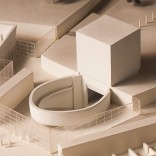 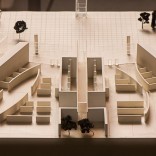 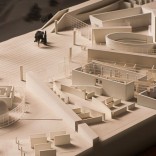