By definition, a place is any given space capable of holding any given thing. What enables us to characterise and distinguish one place from another is precisely the nature of what they hold (people, things, thoughts), as well as the processes and the period in which they were constructed. Memory, identity, belonging or limitation are among the key concepts associated with places that give them some sort of meaning for us.

Of places and things is an exhibition that uses contemporary art to reflect on the symbols, meanings and senses we use to build and fill places, and also on the relationship between a work of art and the space where it is displayed.

Through 41 works from the Banco Sabadell Art Collection, Of places and things brings pieces by a selection of the most relevant contemporary and current artists from Galicia, Spain and Portugal to the Gaiás Centre Museum.

Of places and things brings together three generations of artists from amongst the most relevant of Galicia, Spain and Portugal, following the evolution of contemporary art from the second half of the 20th century to the present. 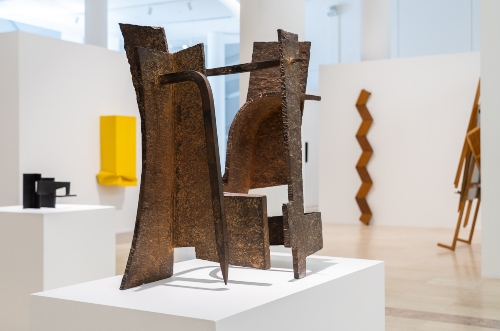 The second generation is comprised of artists born primarily between the late 1940s and the 1950s. These include works that dug deeper into experimentation with techniques and materials for creations that reflect on the relationship between art and literature and words, mass media, nature or architecture, by Txomin Badiola, Manolo Paz, Susana Solano, Jaume Plensa, Pedro Cabrita Reis, Cristina Iglesias, Juan Ulsé, Pep Durán, José Pedro Croft, Ignasi Aballí, Montserrat Soto and Lluis Hortalà.

Our journey is completed with the creations of artists born in the 1960s and after, who continue to explore beyond the limits of both their works of art and their relationship with the exhibition space: Mar Arza, Irma Álvarez-Laviada, Alicia Framis, José Dávila, Ángela de la Cruz, Alberto Peral, Dora García, Itziar Okariz, Oriol Vilapuig, Mateo Maté, Jordi Colomer, David Bestué, Christian García Bello and Teresa Solar Abboud.

In this exploration of the symbolic relationship of art vis-a-vis objects and places, architecture, nature and the city feature prominently throughout the exhibition. The Of places and things collection includes works that reflect on urban spaces —Maravillas y Prototipos (2) [Wonders and Prototypes (2)], by Jordi Colomer—, that impregnate architectural elements to give them new meaning —La habitación de la arquitectura prohibida [The room of forbidden architecture], by Alicia Framis—, and others that work with natural elements as raw materials or objects of representation. The latter can be seen, for example, in the wooden beehive structure of Vertigo, by Manolo Paz or in Phreatic Zones Studi IV, by Cristina Iglesias, where copper is used to represent aquifers.

Another element common to several of the artists taking part in the exhibition is related to writing, literature and poetry. One example is the sculpture We, by Jaume Plensa, comprised of letters from eight different alphabets that, despite their linguistic dissimilarity, manage to bring together a single, reflexive and transparent figure. Dora García, Ignasi Aballí and Mar Arza are other artists who work with words, fragments of books and literary references to build poetic, visual worlds.

Finally, Of places and things includes an additional current that sheds light on the construction of a relationship with the artistic action itself, with previous authors and movements or with the society they belong to and how it perceives contemporary art. David Bestué, Ana Jotta, Irma Álvarez-Laviada, José Dávila and Isidoro Valcárcel Medina are examples of creators working along this line. Reflexive, ironic and even humorous pieces examine sculpture and painting and their role in today’s society.

The Banco Sabadell Art Collection has expanded in keeping with the growth of the bank. Most of the works are current and, as usual, they were acquired due to their artistic quality, their innovative value and their value as an investment, in addition to their decorative value. In that sense, it is important to bear in mind that one of the things that makes them unique is precisely the way in which they decorate the working spaces and the spaces for meeting with the bank’s customers and shareholders. Value and aesthetics blend to become a distinctive element of Banco Sabadell’s image and brand.

— The exhibition closes on mondays