Pharaoh. King of Egypt explores the symbolism and ideology of the Egyptian monarchy and attempts to reveal the stories that lie behind the objects and images of the heritage left us by this ancient civilization. The exhibition organized by the La Caixa Foundation includes 140 pieces from the prestigious British Museum. It is hosted by the City of Culture with the collaboration of the Regional Government of Galicia as part of the celebration of the Jacobean Year of 2021.

The human face of the gods

The pharaohs constructed their public identities carefully through statues and monuments, projecting an idealized image of themselves, either as powerful warriors who protected Egypt against its enemies or as fervent worshippers of the gods, acting as intermediaries between them and the rest of humanity. Behind these representations of royalty, however, the reality was much more complex. The rulers of this land were not always men: the famous queen Hatshepsut, for example, governed the destiny of Egypt as pharaoh between c1472 and 1458 B.C., although in official monuments she nearly always appeared represented as a man. The pharaohs were also not always Egyptians: in periods of political instability and civil war, Egypt was conquered by foreign powers and ruled by monarchs who formed rivalries between each other, such as the Kushites of Nubia (the north of modern Sudan). They took over the country and formed the 25th dynasty (c. 716-656 B.C.).

Regardless of their origin, or whether they were men or women, the Egyptian monarchs defined themselves by adopting royal symbols. For example, they wrote their names on cartouches or had the uraeus (a figure of an erect cobra) displayed on their foreheads
Although some pharaohs were the object of veneration, such as Thutmose III, who extended the Egyptian empire to its furthest reaches, and Amenhotep I, who after his death was revered as a god, others were condemned to obscurity. This was the case of Akhenaton, who caused a profound religious upheaval when he introduced the cult to the solar disk of Aton as the sole national god.

The objects exhibited in Pharaoh. King of Egypt reflect the diversity that went with the Egyptian monarchy. Together with the monumental statues, beautiful stone reliefs of ancient temples and brilliant golden jewels, the exhibition also includes less usual objects: the coloured inlays that were used to decorate the palace of a pharaoh, for example, give us a hint of how the royal court lived; messages printed in cuneiform on clay tablets prove the intense diplomatic activity between Egypt and Babylon in the 18th Dynasty (c. 1550-1295 B.C.); the wooden bow of one of the military commanders of the pharaoh demonstrates to us of the importance of having a strong army to maintain the security of the country’s borders; a papyrus is evidence of a trial for stealing from a temple; while the images of Persian, Greek and Roman governors who acted as pharaohs remind us, each in their own way, of the multiple challenges involved in ruling over one of the greatest civilizations the world has ever known. 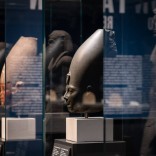 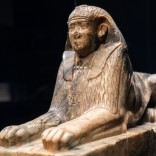 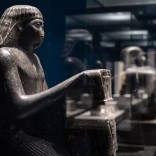 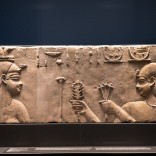 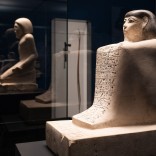 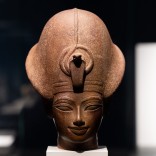 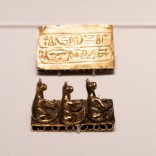 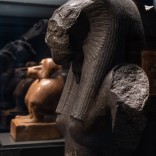