Galicia: a story in the world: some outstanding pieces

Galicia, un relato no mundo [Galicia: a story in the world] is structured around the myths, stories, memories and the lives of Galicians in different periods and geographic contexts.

From the foundational myths of Galicia to the flowering of the mediaeval lyric, from Ireland to Rome, we highlight here just some of the more than 300 pieces that make up the essential story of this exhibition [*]:

The Kennicott Bible  | The Bodleian Libraries - University of Oxford

The Kennicott Bible is acknowledged as a masterpiece of mediaeval illumination, one of the most valuable Hebrew manuscripts in history and the most important witness of the Jewish presence in Galicia. It was completed in La Coruña on 24 July 1476 (the year 5,236 of Creation according to the Jewish calculation). It was a commission from an important merchant in the city, Don Isaac, the son of Solomon of Braga. Isaac and his family were forced to leave La Coruña in 1492-1493 as a result of the decree expelling the Jews promulgated by the Catholic Monarchs. They probably took the Bible with them.

The book was taken on a hazardous journey through Portugal, the north of Africa and Gibraltar, and then disappeared for 300 years. In 1771, Benjamin Kennicott, head of the Radcliffe Library in Oxford University, arranged its acquisition for the institution. In 1872 the Bible was transferred to the Bodleian Library, also in Oxford, where it continues until today. Now, 500 years after the exile of its owners, it will return to Galicia to be exhibited in the Centro Gaiás Museum, together with other emblematic works with an important symbolic value for the culture and history of Galicia. Over the years numerous groups and public opinion has been asking for this universal work to be exhibited in Galicia.

The Bible is a magnificent example of how the Muslim, Jewish and Christian artistic traditions converged in 15th-century Spain. Of extraordinary historical and artistic value, it is also the valuable testimony of the Jewish presence in Galicia in the Late Middle Ages. It is now returning there, more than five hundred years after leaving La Coruña in the 15th century.

The Santa is a polychrome wood sculpture by Cambados-born Francisco Asorey, considered one of the sculptor’s most outstanding pieces of work. It is also one of the most significant and controversial Galician works of art of the last century, because of the powerful and provocative symbolism with which he represented a Galician woman, breaking with the aesthetic codes current at the time.

It was presented in 1926 at the National Exhibition of Fine Arts in Madrid, where Asorey won the highest medal at the exhibition with another work, San Francisco. The Santa itself aroused a great deal of surprise because of its representation of a naked Galician female farm worker, bearing a yoke and projecting what is far from the idealised feminine figure predominant at the time. The work gave rise to a wide-ranging discussion in the press about the representation of the woman’s body and political interpretations of the work. It was associated with the struggle of Galician working women, as well as being considered a symbol of Galician’s situation at the time. Years later, in an interview with the press in 1956, Francisco Asorey himself admitted that the sculpture was the work with which he was “most satisfied”.

The Book of Invasions (Book of Leinster) | Trinity College, Dublín 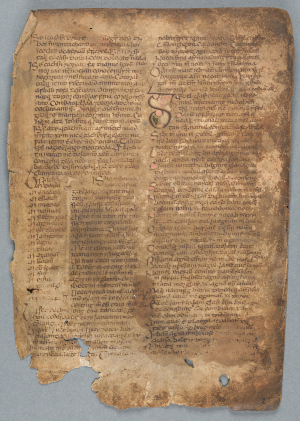 The Lebor Gabála Érenn, or Book of Invasions, is part of the Book of Leinster, one of the most important compilations of mediaeval Irish literature. This work includes the first known mention of Breogán, the mythical leader father of Ith, who saw Ireland for the first time from the lighthouse at Brigantium.

Centuries later, through the work of the historian Manuel Murguía in the 19th century, the legend of Breogán became incorporated into the cultural tradition and identity of Galicia; so much so, that its national anthem calls it the “Home of Breogán”. The Book of Invasions will leave Ireland for the first time, where it is in the collection of Trinity College, Dublin, to be exhibited in  Galicia, un relato no mundo.

The Sawley Map reveals the knowledge of the Kingdom of Galicia in Europe in the 12th century: the period known as the “Compostela Era”, a time of a notable cultural, economic and institutional flourishing of the kingdom. Dating back to 1190, and thus contemporary with the Portico of Glory, the map highlights Santiago Cathedral as the most important building in Europe, depicting it as even bigger than Saint Peter’s Basilica in Rome. It is one of the first European maps of the world and is considered the oldest encyclopaedic map preserved in the British Isles. 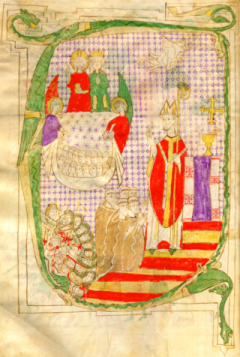 In the 12th century copies began to be made in Compostela of the Codex Calixtinus, with the aim of propagating the worship of Santiago and the pilgrimage to Santiago de Compostela throughout Europe. It extended to major devotional and intellectual centres of the period across the continent. The copies of the Liber Sancti Iacobi in the Vatican and Salamanca, which take the Codex in Santiago de Compostela as a model, are two of the only three illuminated copies of the Codex Calixtinus, apart from the original. They allow us to see graphic details that are lost in the version in Santiago, such as the face of the Emperor Charlemagne.

The Vatican Songbook is, together with the Ajuda Songbook and the Cancioneiro of the National Library of Portugal, one of the collections that preserves Galician-Portuguese mediaeval songs. It was compiled at a period of particular cultural, economic and political splendour of the 12th-century Compostela Era. It is a work of exceptional symbolic value for our culture, but also for the European literary tradition. Portuguese song, together with poetry in the langue d’oc (spoken in Occitania, southern France) and the langue d’oïl (northern France) were the first literary expressions in a Romance language on the continent. 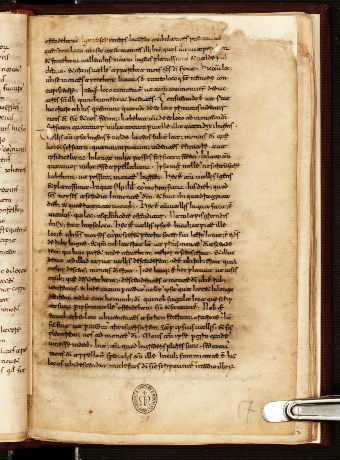 Egeria, a Gallaecian-Roman aristocrat, was the first female writer known on the Iberian Peninsula, and a representative of the small number of women in late antiquity who undertook the pilgrimage from West to East, moved by piety and the curiosity to discover the world of the Bible.

The manuscript of Egeria’s Journey forms part of the Codex Aretinus 405, which has gone through numerous editions and translations across the world, and is one of the most valuable sources for learning about the spirituality of late Antiquity and the role of women at the time.

This piece is of enormous symbolic and historic value. It is linked to the birth of the infantry unit formed by seven hundred Galician volunteers resident in Buenos Aires, which participated in the city’ resistance during the English invasion of 1807. The Galician Infantry Regiment (Tercio de Galegos), founded and directed by the Field Engineer Pedro Antonio Cerviño, was one of the most distinguished units fighting in the defence of the Argentinean capital.

The flag displays the Galician coat of arms embroidered in gold and silver filaments on one side and the city of Buenos Aires on the other. It is linked directly to the events that would later lead to the creation of the Republic of Argentina and is one of the first material testimonies of how Galicians remained together in the Americas.

A key piece for understanding the Iron Age in the north-west of the Iberian Peninsula, thanks to its iconographic wealth. In statues of Gallaecian warriors, the caetra (shield) is the most visible and important element of the panoply of armour and is always represented from the front. It is the first symbol of the peninsular north-west, identifiable as such, that represents the north-west of Iberia in Rome in the early period of the conquest.