Value and Mastery. Galicia as Football

Valor e mestría. Galicia como fútbol (Value and Mastery. Galicia as Football) is the most ambitious exhibition about the phenomenon of football in our community, both in terms of the journey into its history and the number of pieces on show: more than 300.

The journey starts in 1876, the year in which the 1rst reference to the game of football is dated in Galicia —and, according to some historians, also in Spain— until the goal scored by Celta player Iago Aspas at the recent World Cup in Russia.

Throughout these 142 years, Galician football was the protagonist in numerous stellar moments. Thus, the anthology of pieces of this exhibition brings us back the heroic exploits of Galician Olympic players of 1920; and also Luis Suárez, Amancio and Marcelino; of teams such as the Racing runner-up to the Spanish Cup, Pontevedra’s Hai que roelo, the Super Dépor or the Celta that shone in Europe; of Fran, Borja Oubiña, Iago Aspas, Lucas Vázquez and Lucas Pérez; of coaches  such as Moncho Encinas, Arsenio Iglesias and Carriega; and our most international female footballer, Verónica Boquete.

CONNECTIONS OF FOOTBALL WITH THE WORLD OF CULTURE

The relationship between Galician football and culture is not left out of this historical journey. The name of the title comes from Eduardo Blanco Amor, while the author of the main image of the exhibition is Antón Pulido.

In addition, cartoons of soccer players by Castelao are exhibited; the 1rst colour representation of the Deportivo shirt, painted by Francisco Llorens; together with works by José Luis Bugallal, author of the 1rst sports novel published in Spain, Eduardo Galeano and Julio Llamazares.

Valor e maestría also gives Galician women's football the leading role it deserves, catching the astonishing history of goalkeeper Irene, a pioneer at the beginning of the last century, as the rst woman to captain a male team; together with the team Karbo from Coruña, the 1rst champion team of the Women's League in Spain in 1981; all the way to our most international footballer, Verónica Boquete, the rst Spaniard to win a Women's Champions League Cup. 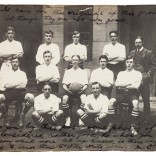 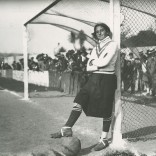 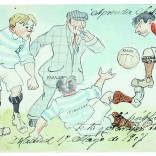 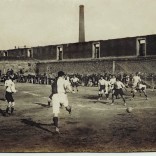 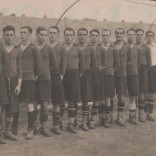 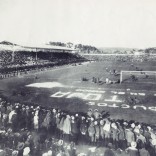 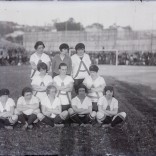 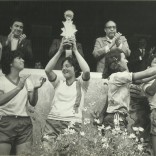